As I posted on facebook this past weekend, we just passed a year of Zack’s first weekend in the hospital. He was admitted to Renown in Reno after a ct scan in Truckee showed a subdural hematoma. We saw Dr. Lynch (our future neurosurgeon, Dr. Perry’s, partner) in the icu, had a visit from an out of town friend, and was released from the neurofloor on a Tuesday (I’m pretty sure) in time to get to the pharmacy and pick up Molly from Jan and Brian’s. Then we were home for for 12 days before the long visit began. 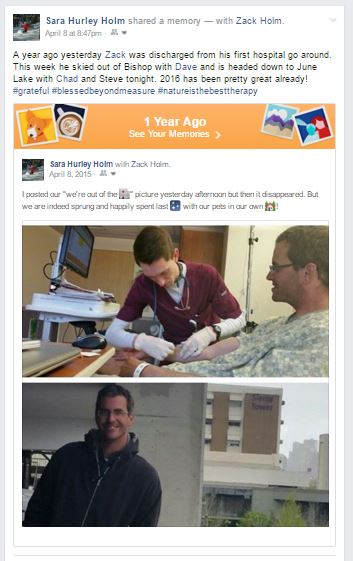 Yesterday Zack started watching My Beautiful Broken Brain on Netflix. I was in the other room and went in to join him with a book .. then ended up watching it with him. I think I’m not quite ready for this sort of new knowledge yet (i.e. I’ve heard excerpts of Jill Bolte Taylor’s tedtalk  a couple times but can’t find the time to read her book) but it was interesting to see the similarities and differences between Lotje’s and Zack’s strokes and recoveries.

Speaking of recovery, Zack and I had time to sit down and do some homework yesterday and I saw so much tangible improvement! I see improvement in his speech all the time, but I don’t quantify it when it’s part of our every day lives. But with Kara’s support, we have lots of independent practice guides. Yesterday we were working on expressive rehab in 3 categories – opposites, sequence, and common phrases – and he scored almost 80% on each. i.e. I say ‘in and’ and he says ‘out’. I say ‘Monday Tuesday’ he says ‘Wednesday’. or I say ‘It’s raining cats and’ he says ‘dogs’. Not very long ago Zack would know the response but needed to hear the word and see the mouth positions in order to get started. Then he progressed to writing the word, then repeating (and could make initial sounds on his own ~50% of the time). And yesterday he initiated the correct word and sound by himself nearly 80% of the time AND he read a couple of the words out loud by himself. Wowee!

The tagline of my blog has been “how studying educational leadership helps me understand neurosurgery, rehabilitation, and remodeling” and it’s definitely been a lot more about education lately. But Zack continues to work hard every day to propel his own rehabilitation and it shows! He is forcing his brain to strengthen those neural pathways and one year after his first hospital stay, he is on the right track to full recovery. 🙂

Saturday, I got to 🏃🏻‍♀️ the Broken Arrow Skyrace at Palisades Tahoe and it was the perfect day. Clear ☀️ skies, big ⛰, amazing volunteers and aid stations, lots of friends & many tater tots for dinner. 😊
This weekend I'm racing in the @brokenarrowskyrace at @palisadestahoe and raising money for @gotrsierras. I'm incredibly grateful that so many friends and family have already donated and the 🔗 is in my bio if you still want to. 😊 #girlsontherunissomuchfun #girlsontherun
100 mile club is back at Lake Tahoe School and I'm so excited! 😊 #runningmakesmehappy #kidsrun #kidsrunning #kidrunners
Sundog
Happy weekend!
I'm not in the classroom this year but I can (unknowingly) dress like the kindergarten teacher and try to be as positive and patient as she is!
It's been tons of fun 🏃🏻‍♀️ with this guy this summer. He's gotten a lot better at 🛀s, which is 👍🏼 because he loves stinky stuff! 😊 #rescuedogsrock #rescuedogsofinstagram
We broke ground today to get the water going before bobcatting some. (We does not include me.)
It wasn't the 4th of July weekend we'd hoped for but we loved spending time with @mattybowman even while he felt 😰 and learning how to rescue ourselves out of a crevasse while actually climbing a 🌲. We're grateful @arica_sykesdawley and @mdawley11 were 🏡 last night so we could catch up with them on their incredible patio. I read a book a day. And Charlie had the best time with Piper thanks to @lbmsrm.
Last night, we spent the evening with our very own sagebrush & view to the south and were treated to a 🌈! 📸 @zack.holm #landowners #myfavoritehusband