This is an assessment that Zack has taken at least 5 times that I can count off the top of my head. He took it last summer when he was first starting speech therapy at UNR and again today as he is re-entering as a new patient. Tami and I were present at both and while she has the hard data, I have anecdotal-typed-furiously-into-Evernote notes to prove how much improvement Zack has made in the past 9 1/2 months!

I was less good at recording results last year but here’s a little of what I wrote: 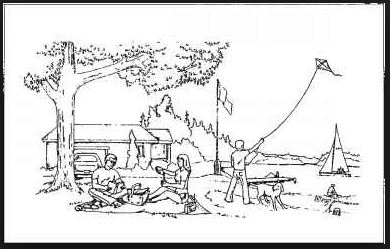 Written Output “Write a story about what is going on in the picture.” childs is dog and kite. The gird sand.

What do you write with? pencil

What color is snow? white

How many days are in a week? 7 fingers then counts up to 7

Where do nurses work? or hospital (with a lot of cues)

Where do you buy stamps? (no response)

Spontaneous Speech (Describing that same scene, this is my interpretation of what I heard Zack saying. i.e. he could have said The man is writing in books but I heard the d sound in the middle of the word so that’s what I wrote.) The man is riding in books. The woman is writing not writing is wine. And music is. The dog is ro not running walking. Sailboat is going take cake. The man is fish p something. Sh house is going and the car.

Written Output  The man is a book. The woman is drunk wine. The boy is kite. The dog is run. The sailboat is lake. The girl is box sank

What do you write with? PencilWhat color is snow? White

What color is snow? White

How many days are in a week? Fingers then count
Where do nurses work? Hopsital
Where do you buy stamps? Post office
Alphabet and Numbers
abcdefighlmnopqr
and #s 0-20
I know it’s hard to tell from this little snapshot of Zack’s results, but his improvement is huge! His score did improve and Tami noted that she saw lots of improvements in writing, reading and naming. Reading to himself and repeating oral language are strengths. Reading out loud is still a challenge and Zack will work on variety and verbs in his sentences when he starts therapy at UNR next week. His apraxia is still quite severe so he often struggles to organize sounds into words.
Some short term goals he’s going to work on include telephone conversations and more text for his Instagram posts using both dictation (which he uses a lot for texting now) and the prediction features on iPhones.
I celebrated by getting him a Total Domination IPA for the drive home! I thought it only fitting. 🙂

One thought on “the WAB – Western Aphasia Battery”

Grateful to spend another trip around the ☀️ with you @zack.holm ❤️
Couple more from the superest funnest weekend including Erin's strong finish, chilly start line, the tallest & the smallest of our group and the Fredericks with touching sparkle skirt solidarity. 💓
A couple days late to say I had the best weekend celebrating with some of the bestest folks in my life. We were blessed with gorgeous ☀️, a beautiful course to 🏃🏻‍♀️, the perfect 🏠 to gather and lots of smiles. Thanks to @letswanderphotography for the race photos and @ryman_n_stealin for the deck photo of most of us. 💗
Happy #worldadoptionday from this 70s sassy pants!
We have blueprints!!
But really, this is why I drove to New England! ❤️
Sure has been a wonderful first week in New England!
What a fun weekend with some of my favorite people. 😍
Part 2 of Storybook Camp!
Storybook Camp was so much fun this week! Thanks to @pacylin @bethferry1 @fisabelcampoy @bartographyatx @teachoutsidethebox for your wonderful books, inspiration and ideas.