[side note: I started this post after a hike on July 9th. Since it’s now August 1st, I figured it’s time to publish it. Yikes! ]

Passing by the lakes on the way up and down, Zack says, “America”.

Oh, we hiked here on the 4th of July? You, Jack and Molly came here on a 4th of July? Why do people keep writing ‘Merica?

No resolution to the confusion.

Then I posted some pictures on Instagram and Shane commented, Oh, Is that Young American (lake) in the foreground?

Here are a couple other pictures I took that day:

This all reminded me of our recent trip to Yosemite (or as Zack says, Sosemite; or as Chris said, Yollowstone). At the end of May, Chris messaged a link to the National Park camping reservation system with this message: June 17 Holm House Party

I showed it to Zack, he agreed that it sounded fun and I responded: Yes! We’re in. We’re super excited to go camping (tent emoji) with you.

I understood that he’d been getting his own permits with his National Park Access Card, I thought that he usually gets them the night before he wanted to go in, but I didn’t know if he’ gotten a permit for Yosemite. So I replied: I’m asking if you have the Yosemite permits.

He responded: I Don’t know.

I tried to rephrase: You do have a permit already for Yosemite camping?

In part because of my delay in understanding who was getting the permit and in part because Yosemite is Yosemite, there was not a campsite to be found! Thanks to our AMC friend Clare who lives near a different western entrance to Yosemite, we found a spot at a National Forest (not Park) campground sort of near the Big Oak entrance.

Despite the long drive to the west side (because of all the snow this year, our usual east side entrance had not been plowed yet) and camping pretty far away from the Valley, we had a fantastic time! 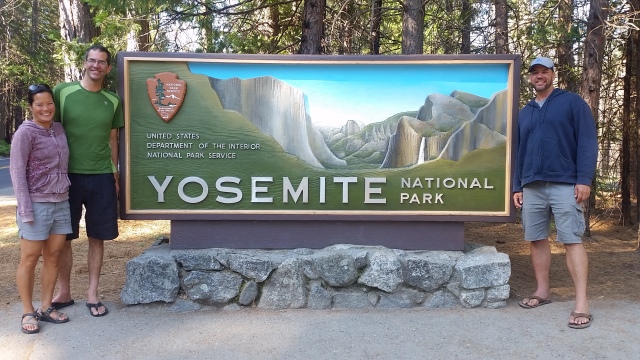 Zack’s the King of the World. (Did you know that seeing Titanic in the movie theater in North Conway, NH was our first date?) 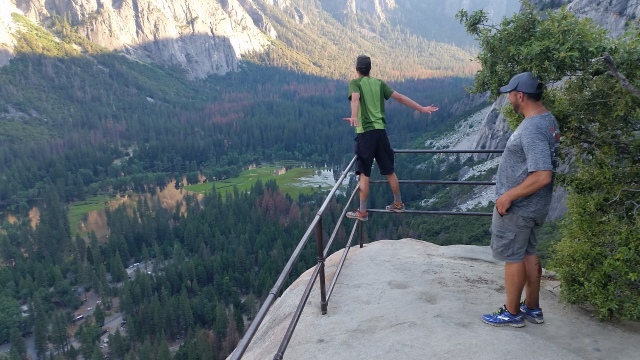 Chris was pretty adamant about the photo ops he wanted including this one where it appears he’s drinking the Falls!

Zack and Chris hiked from Glacier Point to Sentinel Dome. 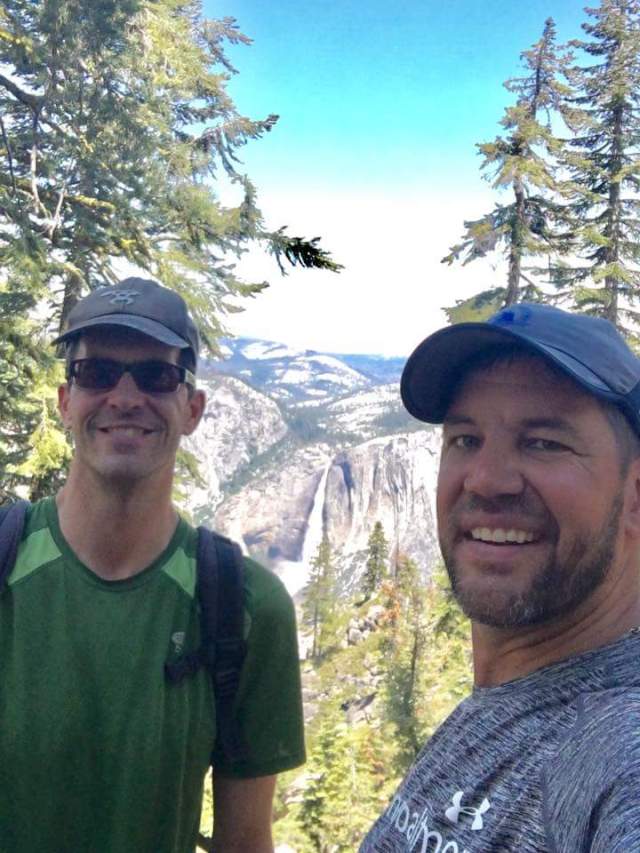 Our campground was up the road from the Holm Powerhouse!

Zack and Chris’ aphasias are very different but I think we made a pretty good team. They each have lots of strategies to help them understand the world around them, even when it’s 100 degrees, incredibly crowded and even more beautiful!

Saturday, I got to 🏃🏻‍♀️ the Broken Arrow Skyrace at Palisades Tahoe and it was the perfect day. Clear ☀️ skies, big ⛰, amazing volunteers and aid stations, lots of friends & many tater tots for dinner. 😊
This weekend I'm racing in the @brokenarrowskyrace at @palisadestahoe and raising money for @gotrsierras. I'm incredibly grateful that so many friends and family have already donated and the 🔗 is in my bio if you still want to. 😊 #girlsontherunissomuchfun #girlsontherun
100 mile club is back at Lake Tahoe School and I'm so excited! 😊 #runningmakesmehappy #kidsrun #kidsrunning #kidrunners
Sundog
Happy weekend!
I'm not in the classroom this year but I can (unknowingly) dress like the kindergarten teacher and try to be as positive and patient as she is!
It's been tons of fun 🏃🏻‍♀️ with this guy this summer. He's gotten a lot better at 🛀s, which is 👍🏼 because he loves stinky stuff! 😊 #rescuedogsrock #rescuedogsofinstagram
We broke ground today to get the water going before bobcatting some. (We does not include me.)
It wasn't the 4th of July weekend we'd hoped for but we loved spending time with @mattybowman even while he felt 😰 and learning how to rescue ourselves out of a crevasse while actually climbing a 🌲. We're grateful @arica_sykesdawley and @mdawley11 were 🏡 last night so we could catch up with them on their incredible patio. I read a book a day. And Charlie had the best time with Piper thanks to @lbmsrm.
Last night, we spent the evening with our very own sagebrush & view to the south and were treated to a 🌈! 📸 @zack.holm #landowners #myfavoritehusband