(I started this on Christmas Eve, as I waited for Reno Diagnostics Center to release Zack’s mri records to me despite being unauthorized just an hour earlier.)

I must say, I’ve held it together remarkably well this past week and a half. After missing about a half week of kindergarten for a flu I’ve named temporary but total fatigue syndrome, I was home on the couch watching cheesey Christmas movies and drinking tea Saturday evening (the 14th). Zack had messaged ht they were on their way home and faced with the prospect of him arriving home to a disastrous kitchen, I called to see how many hours I had left to continue sitting on the couch while also whirlwinding around the kitchen to massively clean. He and our friend Peter were driving home in the van. PK piped up on the speaker phone to say that he was driving the holmawayfromhome because Zack had fallen and was ok, not in pain, but his knee was swollen and stiff so driving wasn’t ideal. I quickly did my dishes, wiped down the counters, put away the laundry then settled back in. Several hours later, Zack came seriously hobbling up the stairs and collapsed onto the couch. His right knee was very swollen and very stiff and he was having a lot of trouble walking. He probably iced it then we went to bed. He and Ben, our good friend with whom Zack and PK were skiing and who is also a PA, had a plan to go to Urgent Care (the particular one where Ben would be working) Sun morning so there was nothing more to do that night.

Urgent Care was what you might expect for a Sunday in December. After dropping Zack off as close to the door as I could to avoid the ice skating rink/parking lot, we hung out in the waiting area with many patients in face masks, coughing and sneezing and looking miserable.

After a short wait, we went back, talked to the nice medical assistant then Ben was able to see us. He did another knee exam (he did 2 on  Sat – one right when it happened and one when they got back to the cars), ordered an xray, crutches and explained why Zack couldn’t have an mri at Renown (insurance). The xray machine at that urgent care was not working so we packed back into the car and headed off to another urgent care with strict instructions from Ben to not let them check us in for an exam. It sounded very scary but worked out just fine.

The xray tech (probably not the actual position) was very nice and the results came back later that day:

No evidence of fracture or dislocation.
Small joint effusion is identified. 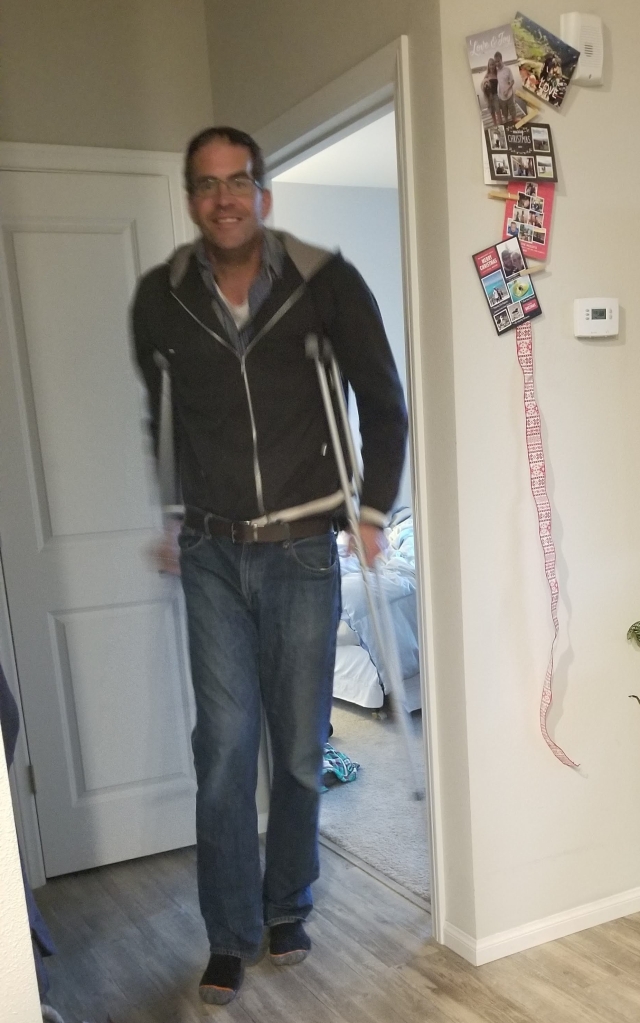 Starting quite early on Monday morning, I began what turned into a longish process of scheduling an mri at a private company in Reno. First, they had to get the order from Renown. Then they had to approve his insurance. Then, their newly appointed mri safety officer had to approve the metal in Zack’s head. I assumed this process would be so speedy because he has had mris since his cranioplasty but I was quite wrong. After questioning the MRI scheduler Tuesday afternoon, I was then flagged as a difficult/aggressive caller and was only allowed to speak with a supervisor. Ben was helping as much as he could from his health care provider angle and I asked Zack’s pcp to get in on the action as well. (We are blessed with great friends and a team of medical folks on Zack’s side.)

Meanwhile, Zack was and still is very diligent about the prehab wall slides that Ben told him to do. 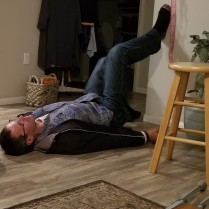 The first appointment we were able to get was on Friday morning but my kindergarteners were in the school holiday show Friday morning and I was making a special appearance as a dancing Groovin Elf and thus couldn’t also be in Reno at the mri place. So we took the first appt on Saturday morning. The tech was so nice and besides getting yelled at for Zack’s ivc filter (by another person), the mri went smoothly and we were home an hour and a half later.

Despite being done by 7:30 that day, it did not get read until Monday morning, then had to be transcribed, then signed off on before being sent back to Renown. Ben texted: ‘I have the report and can talk thru it with you guys when you get a chance. Might be easiest to call when you can.’ That did not sound good so I called right away and wrote down: acl tear — reconstruction? left acl isn’t awesome either. mcl sprain. medial meniscus tear on the inside. bone bruises. It all sounded terrible.

Later that day, Ben sent a blurry copy of the fax that he had received. The next day, Christmas Eve, I went to Reno Diagnostics to get a cd of the mri for the ortho appointment that Zack was scheduled for Monday, Dec 30th. While I had filled out many forms at his mri appointment, I was not offered/did not fill out a Records Release form and was not allowed to pick it up despite speaking with 2 people prior to driving to get it. I may or may not have burst into tears. Lucky for me, Zack was out and about Christmas shopping so we met in a parking lot, he signed the form that I had filled out, and I drove back, stood in the very long line, and gave it back to the client services front desk receptionist person. (While waiting for the cd, I started this post.)

Along with the images, I was given a print out of the report and while it does include many medical and anatomical terms, the Impression section is pretty straight forward.

[This post is very long, I know. Just one more quick thing.] Zack asked if I could put the impression into his phone and I hemmed and hawed for no particular reason. But then I saw that friends would check in with him and he was able to copy and paste the note into a text message and it was a streamlined way for him to share the info. My favorite response so far is from our friend, Geoffrey, whom we’ve known since we worked and lived in NH and who was skiing with Zack when he fell. (and who subsequently helped on the 3 hour slow ski/shuffle out that afternoon) ‘Oh heavens. I’m really sorry man. That is very serious, hard to believe you could have even skied out in that condition. I hope you had a good Christmas notwithstanding.’ The oh heavens part is my favorite.

I’ll update news about Zack’s knee here as we are blessed with many friends and loved ones and not all are on instagram, where I had originally shared the Impression notes.

One thought on “Happy Holidays, You are not an authorized person”

I just learned that today is #koreanamericanday! Thanks to @representasianproject for the graphics about the history.
Sun dog
Happy New Year's Eve!
Merry Christmas!
Happy Winter Solstice!
We loved spending Thanksgiving with Emma, Steve & Co at the Grand Canyon! Steve was our hutmaster when Zack and I first met in August 1995!
Good morning from the #holmawayfromhome! ☀
Happy Thanksgiving!
I'm so grateful I got to celebrate my birthday with 6 of the best people in my life. ❤️
Good morning!